In an effort to help promote historic preservation in Marshall and to provide a look into the past, the Historic Landmark Preservation Board has written short articles associated with Marshall, Texas, then and now.

The articles serve as information to help promote Marshall, the city's heritage, and to document the work being done to maintain its rich past.

Marshall, Texas, the City of Firsts

A few years back, as I drove up Hwy 59 to Jefferson I found myself singing the folk song “Cotton Field”.  “It was down in Louisiana, just a mile from Texarkana, in them ole cotton fields back home.”  It occurred to me, the song that I remember singing as a youth was referring to the vast cotton fields that existed here in East Texas.

What does cotton have to do with Marshall being the City of Firsts?  The foundation and much of the wealth found in Marshall were based on cotton production.  Interestingly, the composer of “Cotton Field”, Huddie “Lead Belly” Ledbetter was born in Louisiana but grew up in Harrison County.

The City of Marshall was established in 1841 and was incorporated in 1843. Almost immediately, it became one of the most important cities in Texas.  Its northern position made it a major gateway from the Republic of Texas (Texas was not a state until 1845) and the United States proper.  Major stagecoach lines made their way into Texas through Marshall.

The importance of Marshall was confirmed early on with a number of firsts.

In 1854, a telegraph line connected Marshall, Texas to Shreveport, Louisiana, and finally New Orleans, Louisiana.  From New Orleans, a message could be transmitted to other major metropolitan areas. Marshall was the first city in the state to have this high-tech communication method. 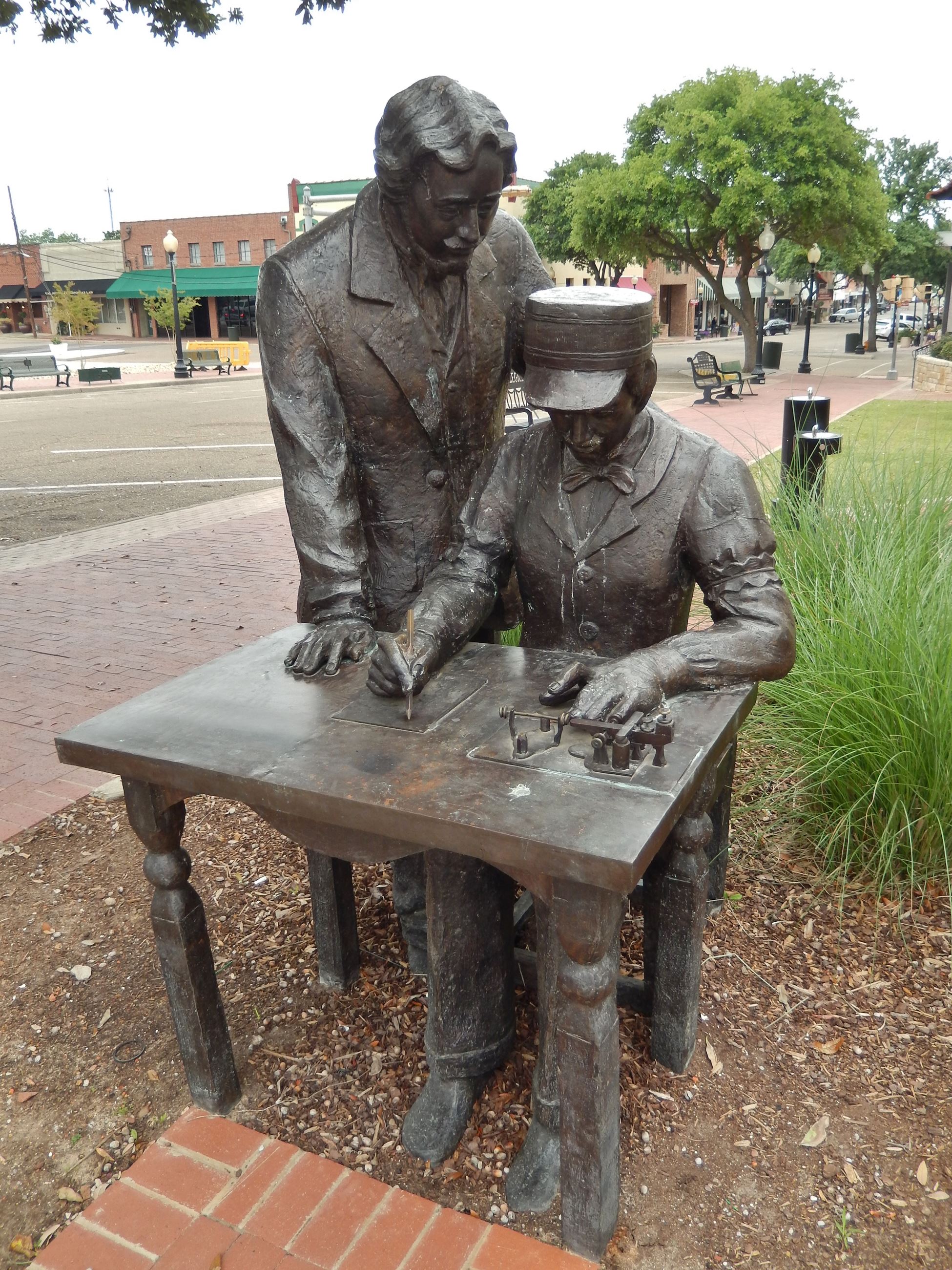 One of the first railroad lines in Texas ran through Marshall.  The line ran west all the way across the state, its final destination: California.  Marshall later became known as the “Gateway to Texas”.

The railroad was used to transport the area’s ample cotton crops and other sundries to market.  By 1860, Marshall was the fourth largest city in Texas and had the reputation of being the richest county in the state.

It was around this time that the first department store in Texas opened in Marshall, the J. Weisman and Co. store.  The Pacific train depot, which can still be seen at the end of Washington Street, was the first building in Texas to have electricity. This is where the first light bulb was installed, illuminating the passengers as they made their way around the state and the country.  Marshall was also one of the first four cities in the United States to have natural gas piped to it. 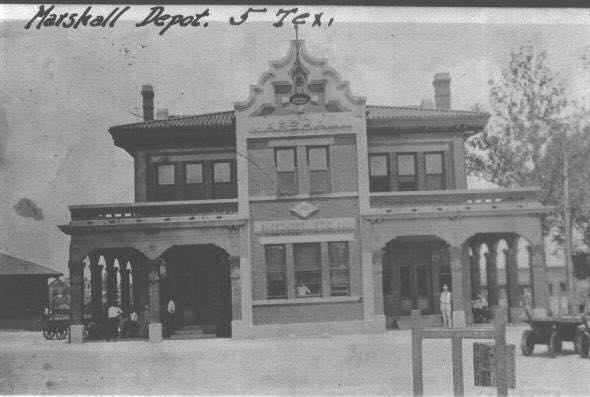 Marshall is also reported as being the birthplace of “Boogie-Woogie” music. While we cannot definitively confirm a Marshall origin, it is generally accepted that this musical style did originate in the piney woods.  Either way, we'll take it.

Another fun first occurred around 1927.  The first student to have a car at Marshall High School was Lady Bird Johnson, the first ‘First Lady’ from Texas.

Our final first comes at a time of conflict in the United States and especially in the south.  It was the dawn of the civil rights movement and Marshall was in on that as well. Encouraged by former students of Wiley and Bishop Colleges, the Harrison County Courthouse was the location of the first civil rights sit-in in Texas. 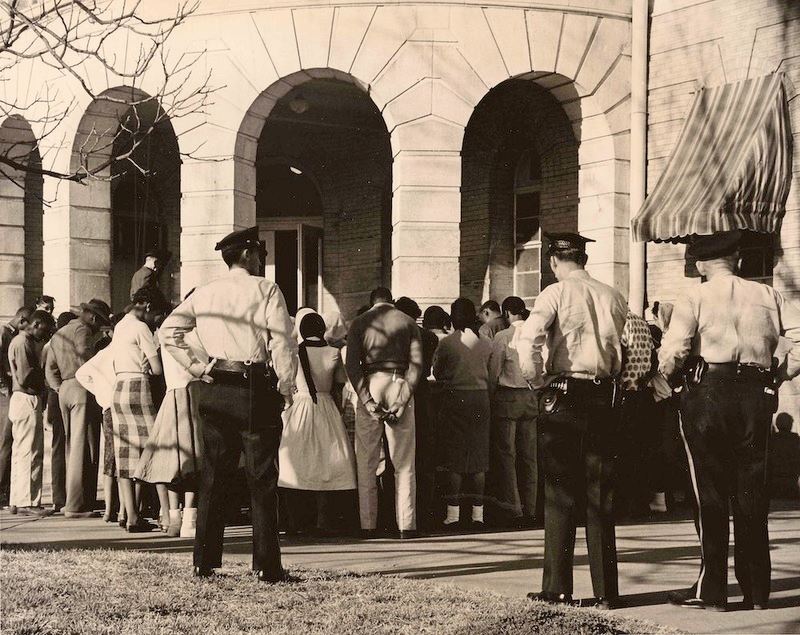 In recent days, interest in Marshall as a destination keeps growing.  We can see this reflected in the renovation and preservation of historic homes and businesses in the downtown area.  It is only a matter of time before our little town of Marshall will get to boast about another first in Texas.

No retail business in Marshall was ever more famous than the “anchor” of the city’s business community, the Joe Weisman and Company. The City of Marshall was officially recognized by the State of Texas in 1842. Only 24 years later, Joe Weisman arrived from Syracuse, New York, ready to build his future on the nation’s frontier. Marshall was the place where dreams came true for those with the courage to pursue them.

Joe Weisman first opened his mercantile emporium in 1878 on the east end of Peter Whetstone Square, near the intersection of East Houston and North Bolivar. A few years thereafter, he moved across the street to the north side of the square and continued his successful and growing business. By 1898, Mr. Weisman had purchased the site of the former King House Hotel on North Washington at Rusk and the adjoining livery stables. Quickly, an amazing 25,000 square foot building emerged, unlike anything then in Texas. 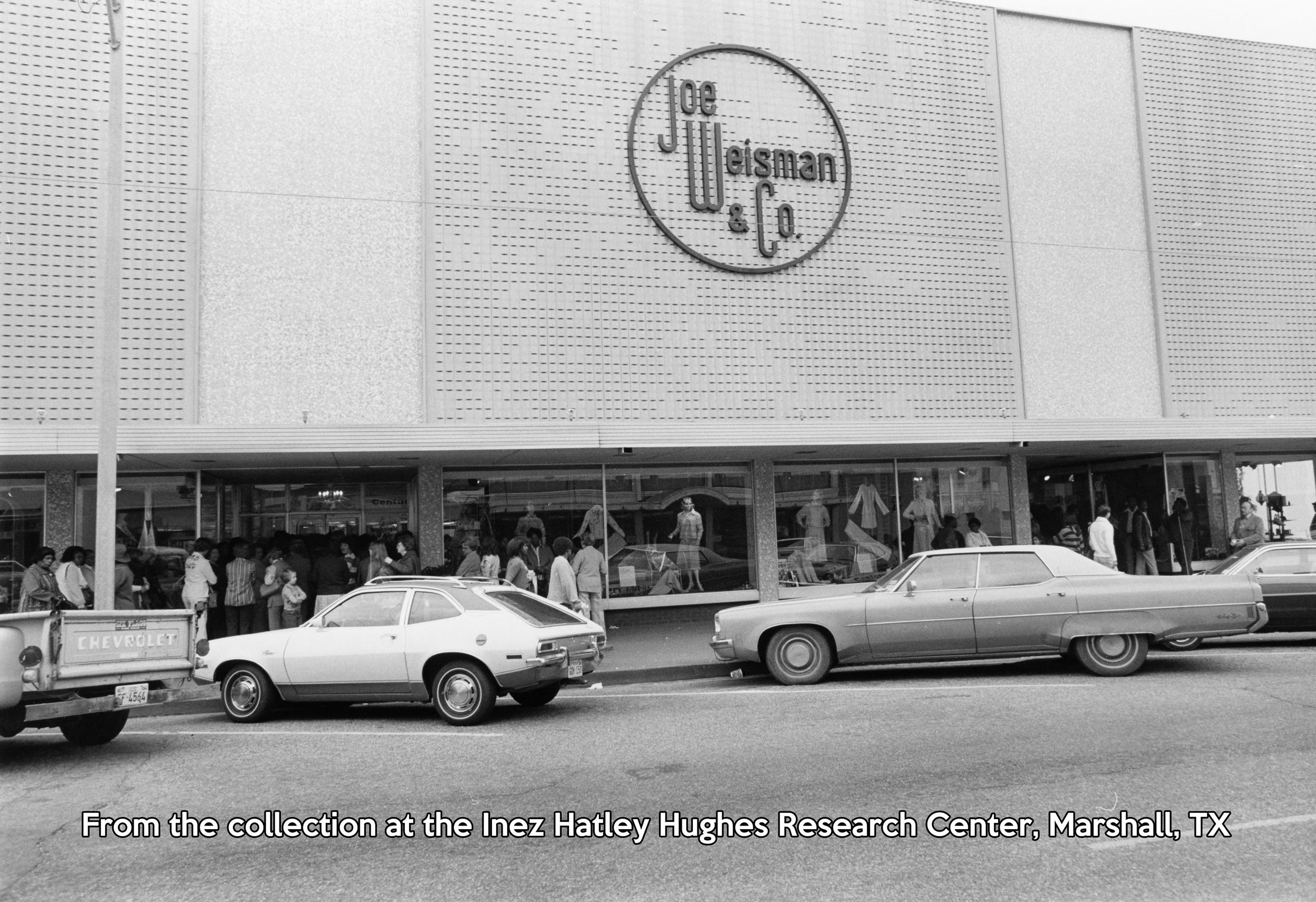 Weisman opened his magnificent new store in 1899 and quickly the store’s fame spread as the source of top-quality goods and discrete but generous personal service to customers. Shoppers came from long distances just to see, and to buy from, this one-of-a-kind outlet. Sunlight through the transom windows illuminated the store and its regal selection of quality clothing, houseware items, furniture, and dry goods. 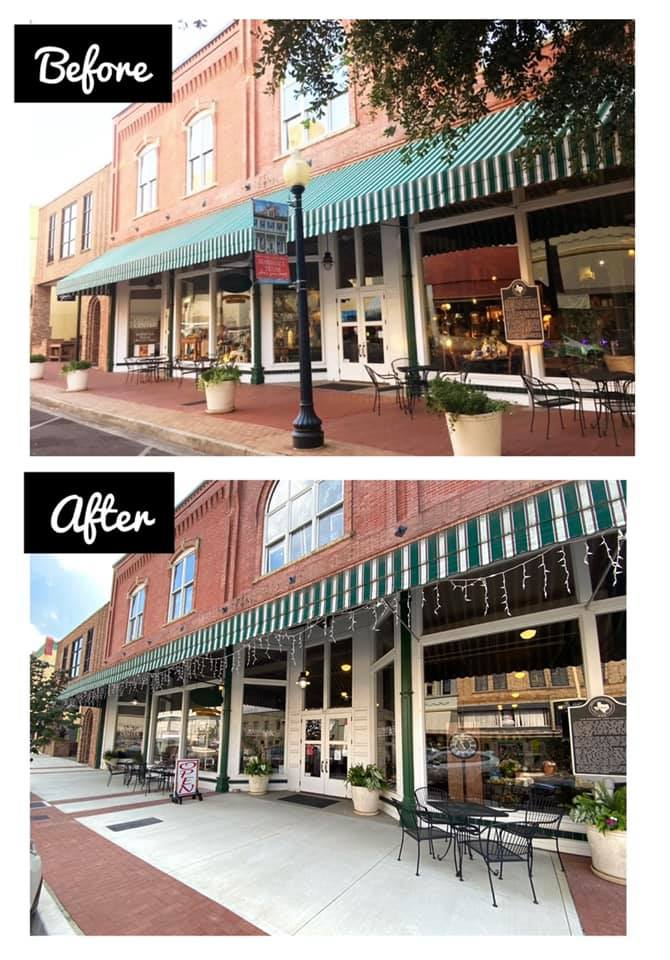 Through the years, the store would be remodeled and updated, such as the revamp in 1914 which included the installation of an electric elevator to assist customers headed for shopping ladies’ ready-to-wear on the third floor or to the mezzanine for sheets and towels. In the1960s, the building was sheathed in aluminum panels which, among other things, covered the windows as well as the beautiful exterior of the original building. This may also be when the towers on the Northeast corner and above the center entrance were removed. 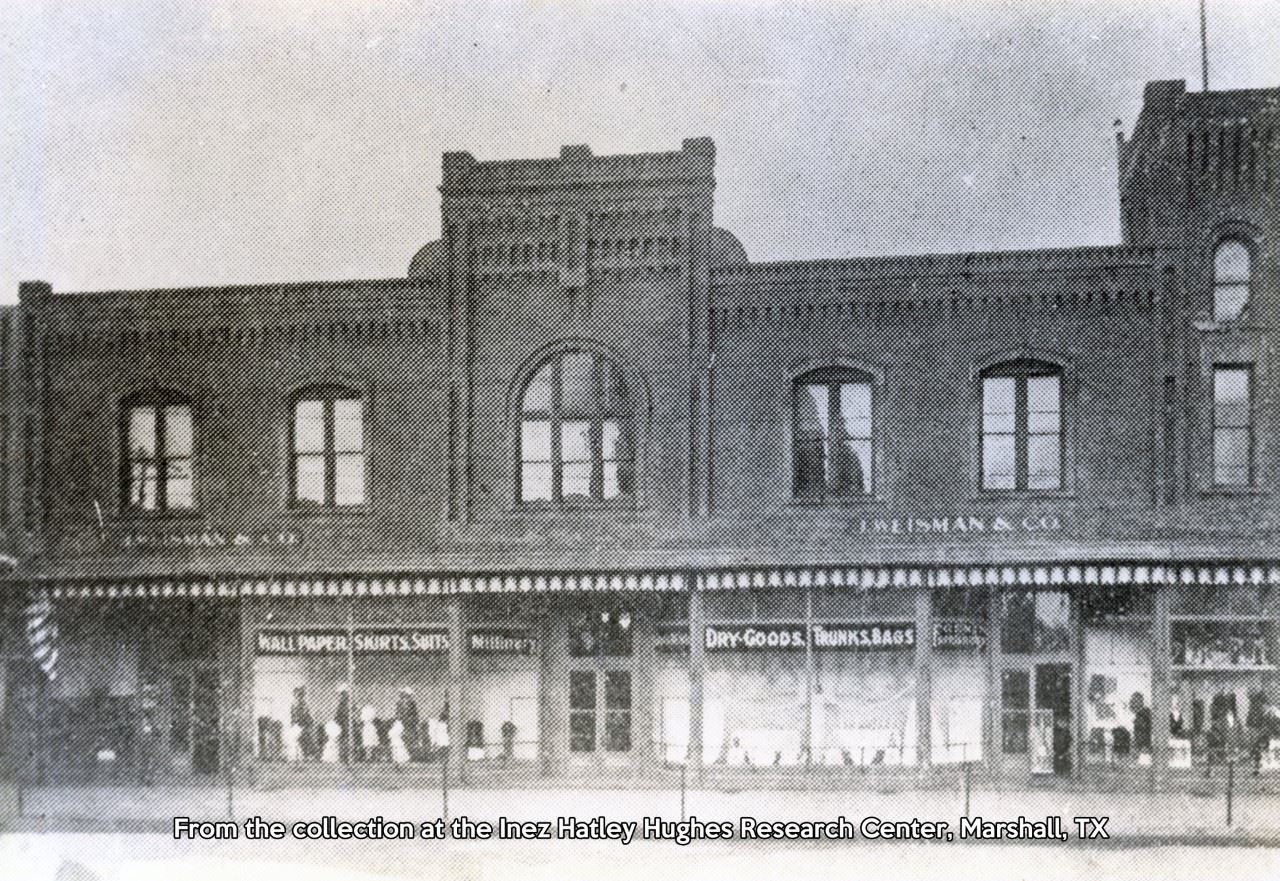 When the store closed during the economic downturn of the late 1980s, the City of Marshall reopened it in 1994 as a retail cooperative. Working with $1.5 million in economic and historic preservation grants, the building was “uncovered” and restored to its original grandeur. In 2003, the building was awarded the prestigious Historic Preservation Award from Preservation Texas.  The award was accepted in Austin by Janet Cook, author of the grant applications that secured funding to rescue the unique structure. The Weisman building now houses Central Perks Coffee Shop and Lunchroom, as well as an irresistible selection of antiques and collectibles in the retail cooperative. What a jewel it is!

The Buard Historic Trail was named to honor Rebecca Drayden Buard.  Mrs. Buard received a BS degree from Bishop College and a MA degree from Southern California University.  She was a teacher, historian, author, and civic leader.  She began her teaching career at age 16 in a one-room Rosenwald School in the High Ridge Community. She also taught at Pemberton High School and Wiley College. 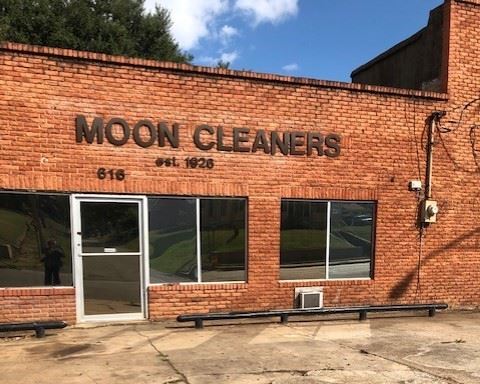 New Town was developed around Wiley College, the oldest accredited black college west of the Mississippi River.  New Town was the home of many prominent African Americans.  This area was chosen by doctors, teachers, and other professionals to set up their businesses. 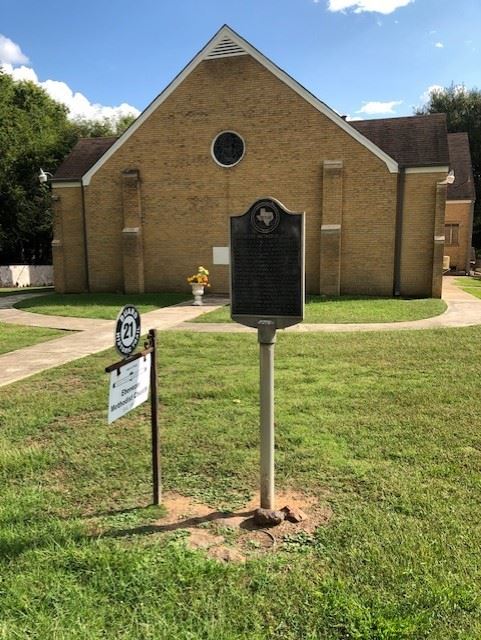 Businesses included grocery stores, restaurants, a floral shop, dry cleaners, medical offices, a hospital, funeral homes, schools, and churches.  Many of the historic buildings are no longer standing, however, these sites are marked with a Buard Historical Trail sign.

You are invited to step 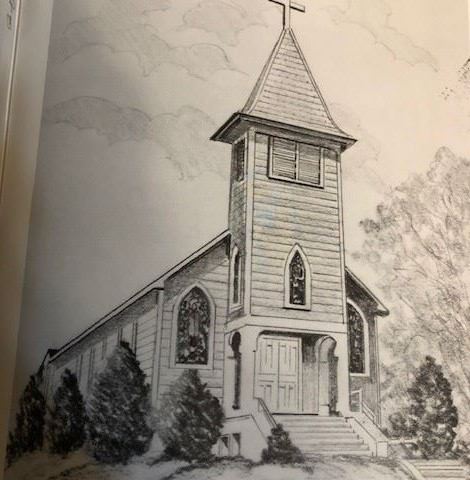 Trail guides are available in the Marshall Convention and Visitors Bureau in downtown Marshall.